TWA only flew five of them and just for a few years. Yet, the introduction of Boeing 307 Stratoliner  was a milestone in commercial aviation. This unique airplane also played a significant role in World War II. Our guide introduces you to an airplane you may not know much about... until now.


The Boeing 307 Stratoliner, surrounded by other models atop Case 1 in our main gallery, has a clearly distinctive shape and profile. A 1940 TWA company publication described the aircraft as a "beautifully streamlined elongated teardrop". But its unique appearance is just the start of a most interesting story. This Stratoliner model and several related items are among the first you'll see on your museum tour. It's worth an early stop with our guide to learn more.


We begin our story by fast-forwarding to today. A typical flight aboard a modern jet airliner offers you the chance to relax in a comfortable environment as you cruise along at 35,000 feet. Just outside your window exists a hostile environment. No one could survive the frigid temperatures and lack of oxygen at that altitude. Yet the air temperature and oxygen content inside are perfectly normal. A glance outside your window shows a thick cloud layer, thousands of feet below you. It's quite possible that storms -and associated turbulence- are embedded in the clouds, but you're not concerned. Except for an occasional (and usually brief) encounter with "clear air" turbulence, your ride is smooth. As you drift off and inadvertently lean your head against the person next to you (who could very well be our guide, who often gets stuck in the middle seat), you probably won't think much about it. But this entire scenario is possible thanks to the technology of high altitude interior air pressurization. And for that, we can turn to the story of the Boeing 307 Stratoliner. The first pressurized commercial passenger aircraft.


The pressure to deal with pressure
In the 1920s and 30s, passenger aircraft such as the Ford Tri-Motor, the Douglas DC-2 and DC-3 had something in common: their interiors were not pressurized. That meant limitations on how high they could fly passengers, based upon a human's ability to breathe air at higher altitudes (without supplemental oxygen). Depending upon the aircraft type, these early airliners only cruised at breathable altitudes of around 6,000 to 10,000 feet. The DC-3 was able to cruise a little higher, but the edge was being reached.

Enter D.W. "Tommy" Tomlinson. Tommy, an early TWA pilot, was an ex-Naval Lieutenant with an interest in high altitude flight. During the period 1935-36, Tommy performed extensive experiments in high performance aircraft, achieving altitudes of 30,000 feet (with the aid of an oxygen mask, of course). Among Tommy's most significant findings? Flying at 16,000 feet or higher kept passengers comfortably above most clouds, storms and their related turbulence.

So now we know 16,000 feet and above was where people wanted to be. Flying at 6,000 feet, through storms and turbulence was certainly where people did not want to be. Our guide has read some first-hand accounts of turbulent Ford Tri-Motor flights and doesn't think you really want to know the details. These experiences helped coin a new vocabulary: "air turbulence", "air pockets", and "air sickness bags" (called "sick cups" in the early days). And don't forget to add the always popular "stomach drop" to the list. To help build passenger confidence, airlines hired on-board nurses to, among other things, reassure passengers and make them feel that someone was there for them, in case they got nervous or ill. More than a few passengers indeed got airsick and looked to these nurse "attendants" for assistance (modern-day flight attendants can trace some of their roots back to these determined and often brave people). TWA executives (and those of other airlines) knew that if commercial aviation was to continue advancing, the fastest route was above the magic number of 16,000 feet. Engineers at Boeing got busy. They incorporated several features from their recently developed military B-17 "Flying Fortress" to design a new passenger aircraft: the Boeing 307 "Stratoliner".  On May 6, 1940, TWA took delivery of its first Stratoliner. The first four-engine airplane to join TWA's fleet, it was fast, it was roomy and it was pressurized. TWA and the airline industry had taken a big step forward.

Time for some science
At this point, you may be interested to know a little about air pressure and the technology introduced by the Stratoliner. Although our guide only got a B- in high school physics, he'll try to explain. At sea level, air pressure averages 15 pounds per square inch (psi).  Your respiratory system processes oxygen at that level almost effortlessly. As the altitude rises, psi decreases and your lungs take in fewer oxygen molecules, making breathing more difficult. Most people can still do well at 11-12 psi, or at about 8,000 feet. And that is the air most of us are breathing while cruising aboard a modern jet aircraft (8,000 feet is a good compromise, as sea-level cabin altitude would create too great a pressure differential between air inside the cabin and high altitude air outside the aircraft). Cabin air is drawn from outside and then raised to a much higher pressure, as it flows through air compressors. That high-pressure compressed air is also very hot, so it is then cooled and expanded to a comfortable, human-friendly temperature and pressure before entering the cabin. Fresh air is constantly being pumped into the cabin through this process. Old, stale air is released through an exterior outflow valve, which also regulates air pressure. Oh, and here's an interesting topic for your next dinner party: back in the days when smoking was allowed on aircraft, tobacco tar really gummed up the pressure outflow valve. Cleaning up that valve and the streak of gunk it left on the airplane's exterior (where the air exited the valve) was not pleasant work. Class over... Back to the Stratoliner.

It's good up here!
In May and June,1940, Boeing delivered five Stratoliners to TWA. Other orders included three from Pan Am and one from Howard Hughes. Mr. Hughes ordered the plane for his personal use. There's no doubt, life above 16,000 feet, inside a very comfortable Stratoliner was good. TWA used the aircraft largely on its east coast-to-west coast routes, typically making three stops en route. At 16,000 feet, the Stratoliner could speed along smoothly at 215 miles per hour, while maintaining a comfortable cabin atmosphere equivalent to 8,000 feet. At 20,000 feet, the speed could increase to about 250 miles per hour, maintaining a cabin pressure equivalent to 12,000 feet.

The 33-seat interior was well appointed. For night travel, the capacity was reduced to 25, as several seats converted to sleeping berths, in four private compartments. The Stratoliner even offered separate men's and ladies restrooms: the "Men's Lounge" and the "Ladies Charm Room". Restroom dimensions were an impressive 8.5'x4' for men and 9.5'x5' for women. Remember that the next time you bang your elbows in a modern aircraft lavatory! Yes, life was very good above 16,000 feet. Then, along came a problem: World War II.

Drafting the Stratoliner
In April of 1941, with World War II spreading throughout Europe, the U.S. government, in support of its allies in Europe, required the usage of four-engine aircraft to fly munitions and supplies to troops in Europe and North Africa. TWA and Pan Am met with the government and formed the Intercontinental Division (ICD), to provide aircraft and personnel for this effort. In late 1941, all five TWA Stratoliners were withdrawn from passenger service and flown to Albuquerque, New Mexico, where they were converted for military use. In addition to a new olive-drab paint job, significant modifications were made for their new purpose. The Stratoliners (now known as C-75s), their flight crews and mechanics were contracted to the U.S. Army Air Corps' Air Transport Command (ATC). TWA's Stratoliners and their crews served proudly for two years, flying North and South Atlantic routes as far as Scotland and Egypt. But, by April, 1944, the government took delivery of enough new Douglas C-54 aircraft (the military version of the DC-4) to no longer require the Stratoliners. They were returned to TWA. 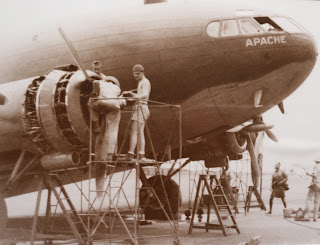 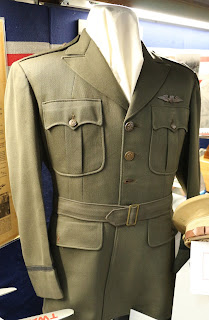 A civilian again
Time and extensive usage had not been kind to these once luxurious aircraft and upon their return from military service, they required thorough renovations. Restoration for passenger service took place again in Albuquerque, with the aircraft returned to TWA's passenger fleet in April, 1945. While the Stratoliners served the war effort, TWA continued aggressive work on fleet modernization. More powerful, efficient aircraft from Lockheed, Douglas and Martin were soon to join the fleet. When TWA received international passenger traffic rights in July, 1945, the fate of the Stratoliner was further sealed. Despite its impressive wartime service, it was not well suited to serve as a commercial international aircraft. It also suffered inherent inefficiencies when compared to new domestic route aircraft. TWA retired its last Stratoliner in 1951. After manufacturing ten and delivering nine Stratoliners in 1940 (to TWA, Pan Am and Howard Hughes), Boeing never resumed production of the aircraft.

An interesting note
The only Stratoliner still in existence sits on display at the Smithsonian Institution's Udvar-Hazy Museum, in Washington, DC. Originally delivered to Pan Am in March, 1940, its final years of service were spent in the Haitian Air Force. It was eventually purchased by the Smithsonian and found its way back home to Seattle, where it was carefully restored to its 1940 appearance in preparation to be flown to the Smithsonian. During a test flight in March, 2002, it crashed into Seattle's Elliott Bay, due to fuel exhaustion caused by a lapse in crew communication. Upon its descent into the bay, the plane came dangerously close to lunchtime diners at Salty's Restaurant on the west Seattle waterfront. Fortunately, there were no casualties related to the accident. The plane was pulled from the bay, repaired at Boeing and flown to Washington, DC in July, 2003. Showing no hard feelings, the staff at Salty's hosted a party to celebrate the successful departure.

On a final note
In a period of only about ten years, the Boeing 307 Stratoliner distinguished itself in its technological advances, its level of passenger comfort and wartime service. Some point out that World War II spelled the end of the Stratoliner, after its ten aircraft were produced in 1940. It's felt the war disrupted the demand and production of the Stratoliner, also hampering Boeing's ability to allow the initial Stratoliner production model to evolve and be improved upon. Nevertheless, the legacy of this great airplane and its service with TWA lives on. The museum is proud to exhibit a large amount of Stratoliner-related items (including five models). We hope you'll visit soon and learn more about TWA's "beautifully streamlined elongated teardrop".