ON THE STREET WHERE WE LIVE 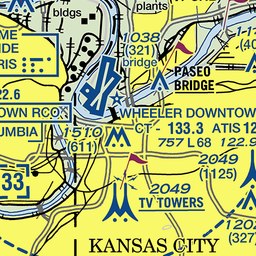 One of the best parts of our museum is where we are located. We are proud to be part of the family at the Wheeler Kansas City Downtown Airport. Opened in 1927, it served as Kansas City's commercial passenger terminal until 1972. Today, it remains a vibrant airport, primarily serving general aviation traffic. On occasion, some pretty interesting things go on here and we'd like to share some of them with you. 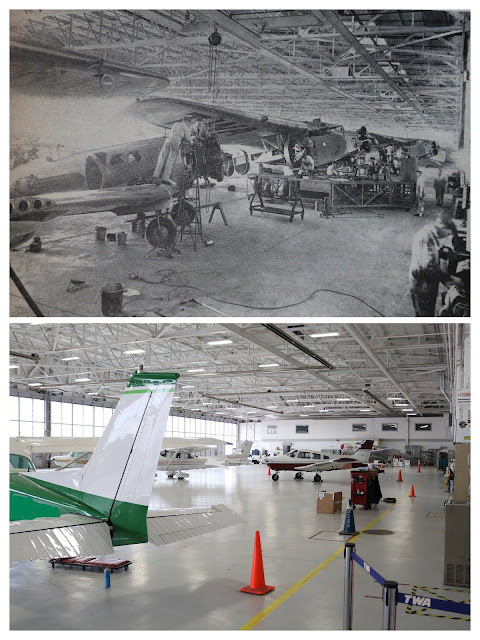 As you might know, we occupy a part of the building at the airport that opened ninety years ago as TWA's first headquarters. Our visitors literally step back into history when entering the building. One of the spots that really brings this feeling to life is the hangar. Look closely at our photo collage above and you'll see what we mean.
The top photograph was taken in the early-mid 1930s. In the foreground is a Northrup Alpha aircraft that was used by TWA primarily to carry mail. Next in the picture are two Ford Tri-Motors, the most well-known planes in TWA's early passenger fleet. It's a typical work day, as a number of TWA personnel are performing various maintenance tasks.
We recently took the bottom photograph, trying to duplicate the placement and perspective of the earlier picture. Despite newer airplanes and a few cosmetic changes to the interior, it's not hard to stand there and see the past.
(For your further information, 10 Richards Road is owned by the City of Kansas City. Missouri and leased to Signature Flight Support. We, in turn, lease a portion of the building from Signature. The airplanes are privately owned, with Signature providing hangar space. Our museum's Lockheed Electra 12A is also housed in the hangar). 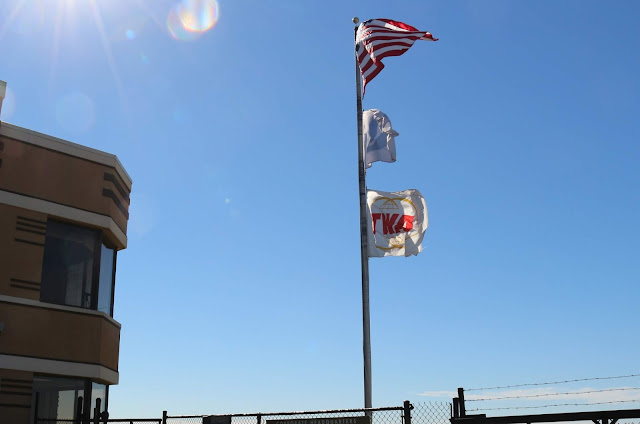 It's been a pretty rough 2019 winter in Kansas City, so we're glad to see some blue sky at MKC. It provides a great background  for the TWA flag flying right next to our museum's building. Above it is the flag of Signature Flight Support, with whom we share the building. The constant activity on Signature's ramp provides an interesting backdrop for visitors to our museum.

As you probably know, our building was opened in 1932 and served as TWA's first headquarters and maintenance facility. You're looking at the northwest corner of the building and specifically, at the second floor office once occupied by TWA's legendary president, Jack Frye. The wraparound windows in Jack's large office gave him a bird's eye view of TWA's operation, as the terminal building was just a few hundred feet to the north. Our museum occupies several rooms on the first floor, so our visitors are not able to visit the second floor or Jack's office. Still, there is much in the rooms and halls of our museum to remind you of the great history of the building we occupy. 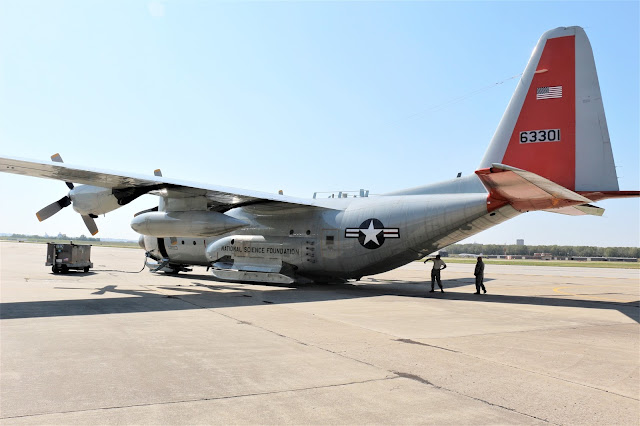 Quite frequently, aircraft from our armed forces drop in to our airport. If we're lucky, we can catch them on the ramp with their crews present. That was the case in October 2017,when this LC-130 transport made a brief stop in Kansas City. When we asked the crew where they were headed, they replied, "Antarctica."

The airplane is one of a group of LC-130 "Skibirds" flown by the 109th Airlift Wing of the Air National Guard, based at Stratton Air National Guard Base, in Scotia, NY. The aircraft is a modified version of the C-130 Hercules transport and if you look closely by the main and nose landing gear, you'll notice the special "ski" fittings, allowing the plane to land on ice and snow runways. The Skibirds are part of the military component of the U.S. Antarctic Program, managed by the National Science Foundation.

In addition to flights in Antarctica, the Skibirds also run seasonal flights to Greenland. In all cases, they carry cargo, provisions, fuel and people necessary to support this important research. As always, we are impressed by the men and women of our military and are always privileged to meet them at our airport. 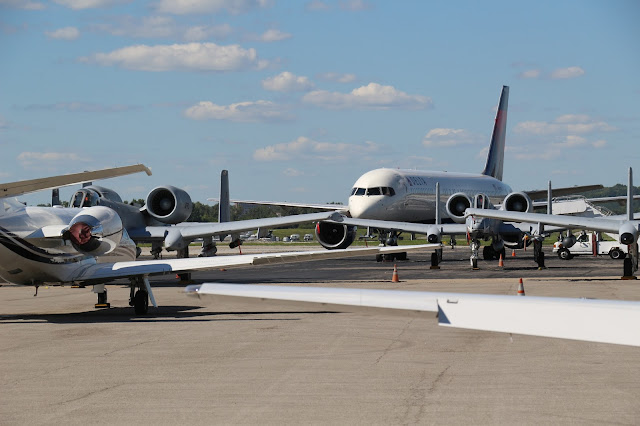 We took a break from our museum tours to snap this very busy and interesting photo on a sunny August afternoon. We're standing right outside the hangar that is attached to our museum, looking north on the Signature Flight Services ramp. Starting at the left foreground, a Cessna Citation 560 is looking out on two of four A-10 "Warthog" fighter jets that were visiting Kansas City. They are based at nearby Whiteman Air Force Base. Beyond the Warthogs sits a Delta Air Lines Boeing 757. It was chartered by the Seattle Mariners baseball team, who were in town for a four-game series with the Kansas City Royals.

Handling over 70,000 aircraft operations in 2017, we suspect our friends at the Kansas City Aviation Department will tell you the scene above was just "another day at the office." 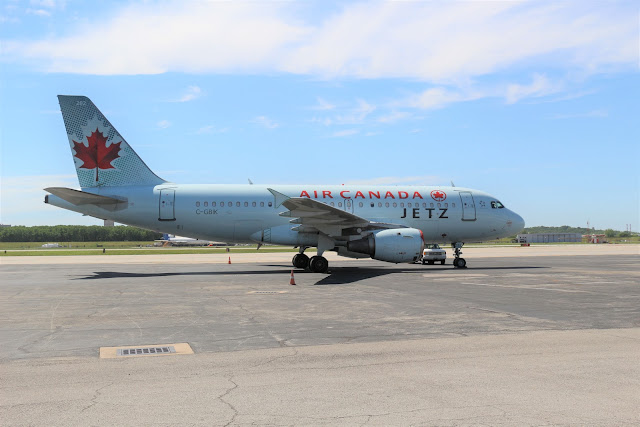 At the airport, we typically see general aviation aircraft (including many sleek and modern business jets). While there is no scheduled passenger service, on occasion a commercial airliner makes an appearance. Usually parked on the Signature Flight Support ramp (right by our museum), it does raise questions from our visitors. So, we thought you'd like to know too.

The Air Canada A319 above is a charter aircraft that brought the Toronto Blue Jays baseball team to town to play the Kansas City Royals. During the baseball season, many teams (including the Royals) utilize the Wheeler Kansas City Downtown Airport for coming in to and going out of Kansas City. The airport's proximity to Kansas City (we're literally across the Missouri River from downtown KC and not that far from the Truman Sports Complex) makes it a preferred destination to those who fly here on private or chartered airplanes.

At 6,827 feet in length, the airport's main runway can accommodate many of today's most common passenger airliners including the smaller members of the Airbus family and Boeing's 737 and 757 airplanes. We see quite a few during the season!

Finally, our friends at Air Canada tell us "Jetz" is the charter division of the airline. They maintain three A319s, each with 58 business class seats inside. Sports teams and entertainers are among their clients. 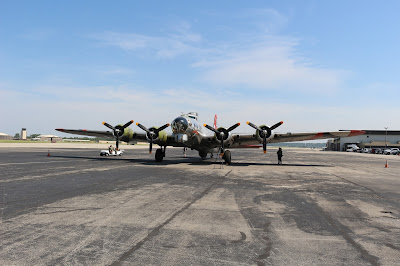 During the week of June 12, 2017, the airport received a special visitor. The "Madras Maiden" is a Boeing B-17 Flying Fortress and it's quite an impressive airplane. It was manufactured in 1944 and served the military through 1959. Since it was manufactured toward the end of World War II, it did not see combat action. But... it sure was equipped for it!

The plane is flown by the Liberty Foundation. A non-profit organization, they use it as a "flying museum", dispatching it throughout the United States to exhibit this important part of our country's history. We enjoyed meeting members of the Liberty Foundation's crew and appreciated them allowing us to board the aircraft. It was an awesome experience. We invite you to find out more about the Liberty Foundation (as well as where and how to see the plane) by accessing their website at www.libertyfoundation.org.

We'd also like to mention our neighbors at Signature Flight Support. The B-17 spent much of the week on their ramp. We share the building at 10 Richards Road with them and the constant activity around their operations area provides a great backdrop for our museum. They also keep a watchful eye on our museum's JetStar II airplane, which is also parked on their ramp. We appreciate having them as our neighbors!

We took more pictures and invite you to view them on our museum's photo page at https://goo.gl/photos/cihkcN29ZeAx47Tb6


>>LET US KNOW WHAT YOU THINK