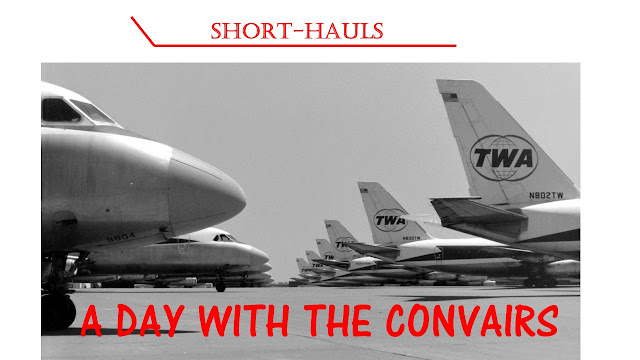 Welcome to the first article in our Short-Hauls section. In it, we'll present stories that are shorter than our blog's full-length articles, focusing more on specific people and/or topics. We hope you'll enjoy this and future Short-Hauls stories.

Our first Short-Hauls article is really two stories in one. First, a photo essay of TWA's retired fleet of Convair 880 jets as it was residing at TWA's maintenance and overhaul base next to Kansas City International Airport, in 1977. We think the photos speak for themselves.

The second story is about the photographer. A (then) 21-year old young man from Amstelveen, the Netherlands and how he found his way to Kansas City, to spend a day with the Convairs.

Fons Schaefers was (and still is) a self-described "aircraft buff". In the spring of 1977, he made his first trip to the United States with a plan: “To see as many interesting aircraft spotting sights as possible.” After landing in New York, Fons rode buses across the country, mostly heading to the airport of each city he visited (he admits to some “conventional" tourist activities in a few major cities). Heading west, Fons made one of his stops in Kansas City, as he knew about a group of 25 retired TWA Convair 880 jets sitting together at TWA’s overhaul base. Figuring these airplanes would soon be sold, scrapped or moved elsewhere, Fons hoped to photograph the world’s largest gathering of Convair 880s. On May 12, 1977, he stepped off a Greyhound bus in Kansas City and headed for the Kansas City International Airport.

Upon arrival at the airport, Fons walked into Terminal B, home of TWA's passenger operations. Looking east from the terminal, he could see the Convairs parked, however, they were about a mile away.  As Fons recalls, "Being young and not so organised, I had not contacted TWA beforehand." Undeterred, he approached a TWA agent asking if he could “visit” the Convairs. "Quite to my pleasant surprise, the agent found someone at TWA maintenance willing to help me." A few minutes later, Fons made the short trip from the terminal to the overhaul base by taxi. There he was greeted by Larry Andrews, a TWA employee in materials management. Fons remembers, "He allowed me to wander around the set of 25 identical aircraft and take photos. He was even so kind as to drive me back to the terminal afterwards." The result was a series of great photographs that today take us back to a moment in TWA's history. A tribute to the Convair 880s. 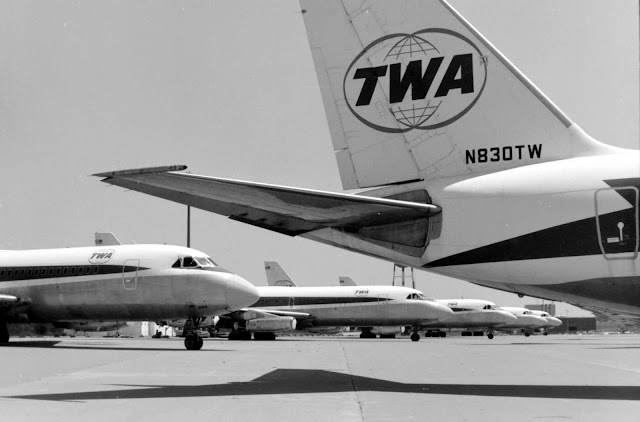 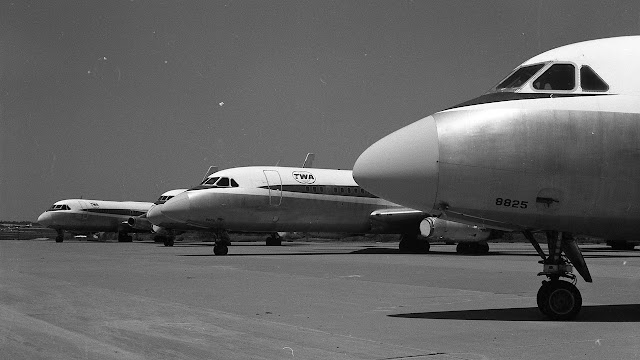 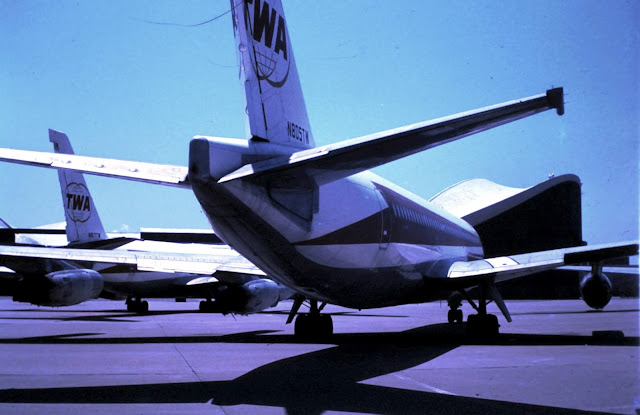 Today, 43 years later, Fons is a retired aircraft safety engineer and lives in the quiet village of Surhuizum, in the Netherlands. His career included working for the Fokker aircraft company, Martinair (a Dutch airline) and SGI Aviation Services (a consulting company). He currently is in the process of writing a book about the history of aircraft cabin safety. He points out that TWA played a pioneering role in the research and development of large commercial aircraft evacuation, beginning in the early 1950s.

We at the blog consider ourselves fortunate to have heard from Fons and thank him for sharing his story and photographs. We also want to recognize the great TWA people who played an important role in the story: The unknown airport agent who cleared the way for Fons to head to the overhaul base and, of course, the late Larry Andrews, who welcomed Fons, once there. TWA's Convair 880s are long gone, but the memories of that day still resonate with Fons.  "I only now realize how privileged I was to be permitted to walk and take photographs there and then.” We, too, are privileged to have been given the opportunity to present the photographs and story of a young man from the Netherlands, who made it to Kansas City and spent a day with the Convairs. 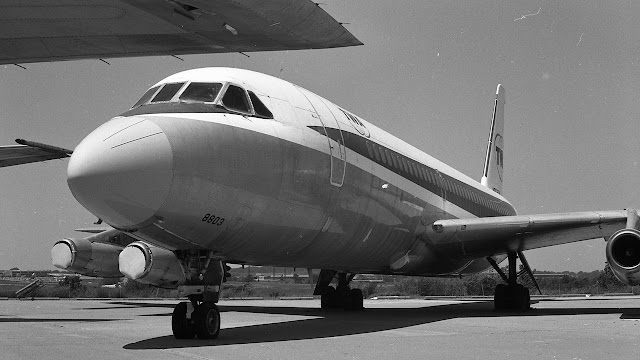 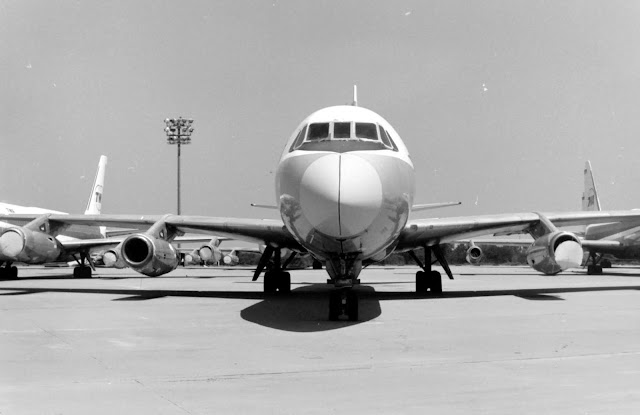 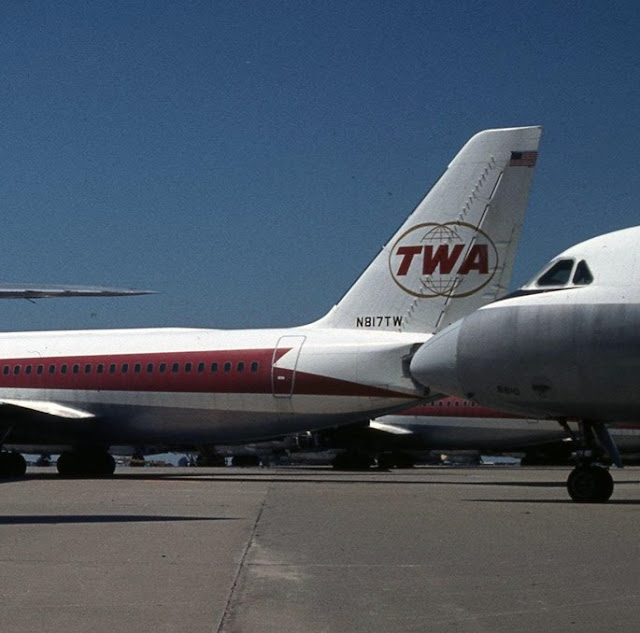 On a final note
We first heard from Fons Schaefers in May. He had been searching online for pictures of TWA’s 25 retired Convairs at the overhaul base and came across our blog’s Photo of The Week that was posted on November 5, 2018 (it’s shown below). After comparing the notes and photographs from his 1977 visit, he determined the time our photograph was taken and the time of his visit were very close. He emailed us his story and photographs and the rest, as they say, is history. Fons was even able to identify the ship number of each of the 25 Convairs in our photograph and we’ve included that information below our original photo. For those of you with an interest in TWA’s Convairs, here’s your chance to identify each one, as they stood together in 1977 (click on the photo to enlarge). Thanks, Fons.

Some Short-Hauls facts
TWA had a fleet of 28 Convair 880 jets that flew from 1961 until 1974. Although they bore some resemblance to the Boeing 707 (TWA’s other four-engine jet flown at the time), the Convair was smaller and interestingly, faster. Known by pilots as an “airborne hotrod”, it could reach speeds up to 650 miles per hour! Unfortunately, the spike in oil prices during the early 1970s highlighted the operational inefficiency of the Convair 880, hastening its retirement from TWA’s fleet.


Tell us your Short-Hauls story
We'd like to give our blog readers the chance to tell their stories about having been a TWA passenger or employee in a Short-Hauls article. If you have an idea for a story, let us know. We'll get back in touch with you to see if it might become a future article. Please address your correspondence to: twamuseumguides@gmail.com.


Article written by: Wayne Hammer
Edited by: Larry Dingman
Copy editor: Pam Tucker
Unless noted, all photographs are the property of Fons Schaefers

Click or tap here to go to our blog's home page